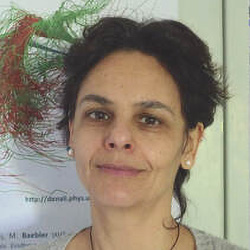 I was born in Rome on March 14, 1970.
I studied Physics at La Sapienza University, in Rome, Italy. In July 1995, I got my Master Degree with a thesis on "Turbulence in viscoelastic flows", under the supervision of Roberto Benzi and Giorgio Parisi. I studied how the "4/5 law" of turbulence is modified for a non-Newtonian turbulent flow, by an analytical model.
From 1996 until 1999, I moved to Nice (France) and did a PhD in Physics at the Observatoire de la Cote d'Azur, thanks to a EU grant Marie Curie-Training and Mobility of Researchers. My PhD supervisors were Massimo Vergassola and Uriel Frisch. The PhD work was on "Anisotropy and structures in the turbulent transport". I studied anomalous scaling laws in anisotropic passive scalar, and passive vector turbulence (kinematic dynamo). I also studied passive scalar intermittency in a shell model of turbulence, by means of an instanton approach. My most important contribution is the demonstration that a large-scale dynamo can exist in parity-invariant flows, by negative magnetic eddy diffusivities as first suggested by R. Kraichnan.
From April 2000 until December 2001, I moved back to Rome, and worked as a Post-Doc with Luca Biferale, at the Physics Department of Tor Vergata University. The research subject was "Anisotropy in Turbulence". I got interested in problem of 3D homogeneous and anisotropic turbulence, steady and decaying, and on the statistical characterization of 2D turbulence.
Starting from December 2001, I joined the National Research Council (CNR), with a research permanent position at the Institute for Atmospheric Sciences and Climate (ISAC), in Lecce (IT). Since then, I integrated my interests for the statistical properties of ideal turbulent flows (statistically homogeneous and isotropic), with a new interest for realistic, geophysical flows: multi-phase flows, planetary boundary layer flows. In particular, I have been working for some years on the Lagrangian transport of inertial particles in turbulent flows, and on the role of turbulence in the formation of cumulus clouds.
From March 2008 until June 2012, I have been Lecturer for a class on Deterministic Chaos, at the Physics Dept. of the University Tor Vergata, Rome. In 2012, I got the Italian ASN as Associate Professor in SSN 02/A2 "Fisica Teorica delle Interazioni Fondamentali", 02/B2 "Fisica Teorica della Materia"; 02/C1 " Astronomia, Astrofisica, Fisica della Terra e dei Pianeti".
Starting from December 2018, I have a position at the Institute of Nanotechnology (CNR NANOTEC), in Lecce (IT).
If you like numbers: H index = 20 (IsiWebofKnowledge).